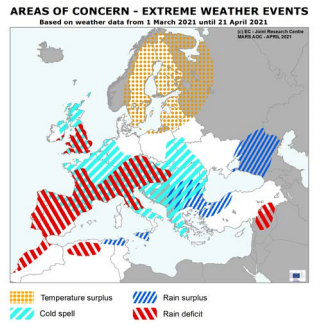 European Commission JRC
-
Tuesday, April 27, 2021
Adequate thermal and topsoil moisture conditions allowed for a timely start to the sugar beet sowing campaign in France, around mid-March. However, freezing temperatures recorded during the first dekad of April had a very negative impact on plants during emergence and early development, especially in the central regions. As a consequence of frost damage, approximately 10% of the sown sugar beet area in France needs to be re-sown. In Germany and Poland, below-average daily temperatures during the first and second dekads of March led to delayed warming of the topsoil, and hence some delay in the sowing campaign (7-10 days, compared with last year). Favourable thermal conditions and dry weather allowed for good sowing progress during the third dekad of March, while in April, cold temperatures and rainfall events slowed the pace of field operations. Nevertheless, the sowing campaign is close to being finalised in Poland, where 90% of the area had been sown by 20 April. Similar agrometeorological conditions prevailed in the Benelux countries, where sugar beet sowing has almost been completed, as well as in Czechia, Slovakia and Austria. Across western and central Europe, cold spells during the first dekad of April prolonged the emergence and early development of sugar beet and raised concerns regarding the health of seedlings. In the UK, agrometeorological conditions were favourable for a timely start to sugar beet sowing during the second dekad of March, and the sowing campaign was conducted under adequate seed bed conditions.
Click here to connect to the source of this storyClick here for more News and Views