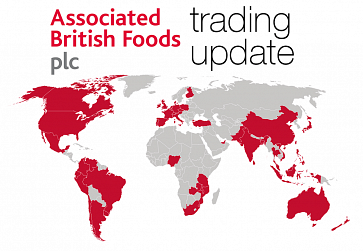 ABF
-
Thursday, September 8, 2022
AB Sugar revenue is expected to be substantially ahead of last year driven by higher sugar and co-product prices. The contribution from higher market prices and the continued focus on cost savings broadly offset the effects of significant input cost inflation, particularly energy, and some operational difficulties in Southern Africa. Recommissioning costs and start-up losses at our Vivergo bioethanol plant were some £30m. We are expecting operating profit to be ahead of last year. European sugar prices moved much higher this year. Looking ahead we expect European sugar demand to remain in excess of production in our next financial year. These stronger prices have been supported by higher world market sugar prices. UK sugar production was 1.03 million tonnes, compared to 0.9 million tonnes in the last campaign, with much improved sugar yields as a result of good growing conditions. The factories performed well. Forward cover of gas costs mitigated much of the impact of very high energy prices in the year. We have benefitted from improved margins for electricity produced for export to the grid and from bioethanol derived from sugar beet. Recommissioning at Vivergo has progressed well. The performance in Spain improved with higher prices, production and sales volumes. Very high temperatures in the south of Spain have reduced beet crop yields and increased imports of cane raws for refining have mitigated the shortfall. Illovo continued to deliver strong domestic and regional sales volumes and benefited from higher market prices. The season saw disruption to production in Malawi, Eswatini and Mozambique following cyclones Ana and Eloise and high rainfall in South Africa. As a consequence Illovo's sugar production for the full year is expected to be 1.45 million tonnes compared to 1.58 million tonnes last year. We expect adjusted operating profit to be in line with the much improved result last year.
Click here to connect to the source of this storyClick here for more News and Views